Cops N Bandits is an online slot machine game, created by Playtech. It features a five reel, thirty play line system, as well as having a few bonus features. The visual style of the game is based around the theme of two clumsy bandits on the run from a police officer. These characters are brought to life with charming cartoon images, sure enchant players and keep them hoping for the bandits to continue evading the law.

Choose How to Play

The game is available on mobile phone, tablet, home computer and laptop, with the most stable version being offered on home computer. If wanting to play, please download the game from the appropriate casino site, allow it to install, and tap the game’s icon to play. Note that the game may not run on older model mobile phones.

In sticking with the theme, Cops N Bandits has symbols designed to fit the story, using a cartoon style that translates perfectly to smaller mobile device screens. Some of the images are the two bandits, one dressed in red and other green, the police officer who is hot on their heels, a pair of handcuffs, a sack of money, as well as a golden police badge.

The two thugs are the most valuable symbol in the game, and will payout handsomely if matched with themselves, or each other, a maximum of five times. The picture symbols are played alongside the traditional playing card symbols, including ten, jack, queen, king and ace. The real money, however, is found in the game’s bonus symbols, which will trigger mini-games if matched with themselves in a sequence. 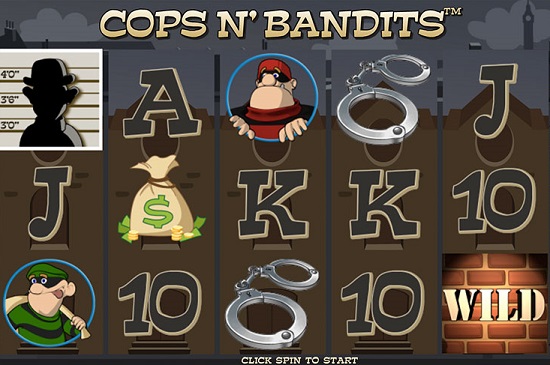 If the golden police badge is matched three times, anywhere on the reels, the player is allowed to choose one of the three. Hidden beneath each badge will be a number of free spins, as well as potential instant cash. The free spins will play out, awarding wins at no extra cost to the player. If four or five police badges are matched, the player may select two of them, with free spins and bonuses hidden beneath. I

n the case of being allowed to choose two badges, the free spins will be added together, allowing for a greater chance at massive winnings. A unique special feature of the Cops N Bandits game is the locked wild feature. If the police officer lands to the left or right of either of the two thugs, an instant mini-game is triggered. The thug will be locked in place and act as a wild, after which free spins will be triggered. During the free spins, the thug remains where he was locked, providing a guaranteed wild for each of the free spins that that follow. The chances of getting matching sequences , therefore, are vastly improved.

The final bonus feature of the game is the line-up bonus system. If the line-up symbol is matched three times, a second window will open. In this window criminals will be arranged for a police line-up. The player may select on of the criminals, which will reveal bonus prizes beneath. One of the criminals is extra valuable, and will grant a huge cash bonus.

For many Australian casino enthusiasts, the best part about travelling around the country is being able to visit and play…

The world of online casinos is a relatively recent business sector, in operation only since the middle 1990s, but in…