Game developers Novomatic have stuck to a fairly simple format for their online and mobile slots game Gorilla; apart from occasional animations of the gorilla beating his chest, the game play is pretty straightforward, without special effects.

Nevertheless, there are plenty of options within the game’s format that help increase a player’s wins, which make it popular with players more interested in spinning the reels and winning than they are in storylines or visual displays. Gorilla plays on five reels, each displaying four lines, and has 50 bet lines. With that many lines on which they can win, even players betting low amounts across all 50 bet lines can make some substantial wins.

The Gorilla reels are set against a leafy jungle backdrop, and the icons are mostly bright and simple, with a hint of African artwork decorating the low-win symbols.

These are the standard poker icons 9, 10, J, Q, K and A, which score between 20X the 800X the line bet, depending on which ones the player gets on a bet line and whether there are three, four or five in sequence from the left-most reel.

Two flowers and two birds comprise the medium-value symbols, but the top-scoring icon in regular play is the Gorilla himself. This realistic-looking gorilla face, when filling an entire bet line with five icons, is worth 2,000X the line bet. 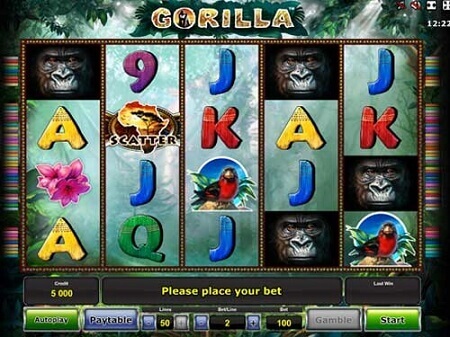 The Gorilla slots Wild symbol is an African mask. Unlike many slots games, the Gorilla Wilds do not have any value in combos of two, three, four or five on their own; their only function is to substitute for any icon (except for the Scatter symbol) on any bet line in which they appear. However, by being able to substitute for different icons on different bet lines that intersect at the Wild symbol at Canadian casinos, the Wild can create more winning lines per spin and increase wins.

After every winning spin, Gorilla players get the chance to accept the win or push the Gamble button; they then have to guess whether a card will be red or black, and if they guess right, they double the win. If they get the colour wrong, they lose it.

The Gorilla Scatter symbol is an outline of Africa around a savannah sunset. Three Scatters in any position on the Gorilla reels not only win a bonus of 400X the bet, but also trigger the Free Spins round. This consists of 10 free spins. Symbols are also stackable, so from time to time players will score an entire reel filled with one symbol, again increasing the chance of multiple wins. The ultimate prize possible in Novomatic’s Gorilla slots game is won if the player gets stacked Gorilla icons across all five reels, in other words filling the entire frame with 20 Gorillas. The pay-out for this very rare win is 100,000X the line bet. However, the game’s combination of free spins, stacked symbols and scatter bonuses can make even less impressive combinations quite profitable.

For many Australian casino enthusiasts, the best part about travelling around the country is being able to visit and play…

The world of online casinos is a relatively recent business sector, in operation only since the middle 1990s, but in…